I recently saw the Academy Award-nominated movie Brooklyn and was mesmerized by the portrayal of life as an immigrant in the early 1950s. The movie reminded of my ancestors who came to the United States from Ireland in the 1870s. As I watched Ellis (portrayed by Irish-American actress Saoirse Ronan) say goodbye to her family in Ireland, endure the long journey and harsh conditions on the ship, and adjust to the new unfamiliar culture, I couldn’t help but think of my own ancestors. How very homesick and lonely they must have felt. How they must have longed for anything that reminded them of home. How afraid they must have been to come so far not really knowing what America would be like. 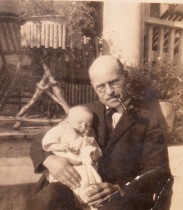 My mother (baby) and her Irish grandfather.

I recently interviewed an 89-year-old woman who came to the United States just after World War II ended. Anna (not her real name) was born in Germany. Her father and two of her brothers fought for the German army. During the war, Anna and her family were separated when they were forced to leave their home with the few possessions they could carry. Fortunately, Anna found a job working as a nanny near Kempten, Germany. She occasionally managed to sneak into the American part of the city to go to the serviceman’s club to dance.

One day, Anna met a young soldier from Texas. Even though she didn’t speak English and he spoke only a few words of German, they spent as much time together as they could over the next four days. On the fifth day, Anna went to meet her young soldier and was told he had been shipped back to Texas. Although she’d known him such a short time, Anna was heartbroken. She didn’t think she would ever see or hear from him again, but one day a letter arrived from Texas. Anna asked her English teacher to read the letter to her. In the letter, the young soldier professed his undying love and asked her to come to the United States and marry him. With the help of her English teacher, Anna wrote back agreeing to do just that. Just nineteen years old at the time, Anna had no way of contacting her family to tell them she was leaving Germany and marrying an American soldier.

She bravely boarded the plane with just the clothes on her back (all she had in the world) and flew to Texas. What a leap of faith that was. Can you imagine picking up one day and leaving your home to go to a foreign country where you don’t speak the language?
Young love is a powerful thing, and it all worked out well for Anna and her young soldier. They were happily married for many, many years, had two wonderful children, and many loving grandchildren and great grandchildren.

I’m sure in her early days in Texas, Anna, like Ellis, must have felt homesick and longed for the familiarity of her homeland, yet she managed to find a place with her new Texas family. She helped out on the farm and worked in the kitchen alongside her new mother-in-law gradually learning English one word at a time.

Like Anna and Ellis, what a tremendous leap of faith our ancestors took when they boarded a ship to come to America. Some came with other family members, but many others came alone with only the dream of a better life–no assurances that it would be better. I don’t know that I have what it takes to make an enormous life-changing leap like that, but I’m certainly glad my ancestors did.

Welcome! I'm Martha--a former magazine editor and freelance writer, now devoting my time and talents to writing personal histories and teaching life story classes. Drop me an email. Let's talk about how I can help you capture and preserve your family stories.